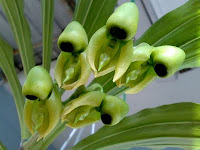 Catasetum integerrimum is derived from the word "integerrimus" which in botanical terms means without teeth, notch or lobes.
This species is mostly confused with catasetum maculatum, the latter had a fringes or small tooth lip while integerrimum lip are smooth, namely integerrimus.

Started from a single bulb cutting about 6 months plus ago, with unknown ID except that it is a species catasetum, all the waiting eventually paid off when this catasetum integerrimum decided to bloomed finally.

the flower is about 3cm across and 5 cm tall and smells like other catasetum in which i describe them as "cinnamon" smell. Most of the evening, water droplets (sap) tend to accumulate at the ventral portion of the hood like structure, i took a sip of it and it's SWEET.
will attempt to pollinate with a female catasetum that just started to blooming today.
Posted by Catasetum_ian at 5:30 AM

Email ThisBlogThis!Share to TwitterShare to FacebookShare to Pinterest
Labels: integerrimum