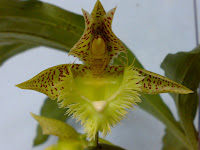 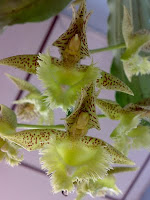 just purchase this plant recently with a spike forming, initially was told that it was catasetum trulla but seems like another mistaken identity plant. when the spike bloomed, i was delighted that it was catasetum fimbriatum since it's new to my collection. i was glad that i pick up this plan because initially thought of not buying it as i already had a trulla back bulb at home (a swap with a friend) but the bulb have not produce any keiki for the past ten months and its shriveling up. but as i said, glad that i did finally.

so that would make my species list for catasetum above ten and still looking forward to collect more. hoping to get my catasetum saccatum var incurvium and catasetum denticulatum next. just got a contact but he mentioned that he got to look for the plant in the "midst of the jungle" ie his nursery. :)
Posted by Catasetum_ian at 5:37 PM