from the previous attempts using DIY home media, seeds soaking and disinfecting and so on.......

i had finally resorted to
1. using commercial media P668 as posted previously
2. use of a pressure cooker would eliminate most possibility of insufficient media sterilization
3. i no longer use the pre soak seeds method as describe previously (the same post with the media             P668)
4. DIY chamber is still the same as previous except i changed the front cover with a polystyrene board


so here are the outcomes.....a few of the flask shown below, i made 12 flask with the new pressure cooker i bought, no contamination. so i guess it would address the issue of insufficient media sterilization i had previously
SO, if i had skipped of the seed soaking method, what now??
- well, i basically just pre washed the seeds in pure bleach solution for a minute plus minus, do not over do it or you will kill most of the seeds. then rinse twice with sterile solution (if is important to remove most of the bleach solution from the syringe before rinsing to have a higher dilution effect on the bleach, it is ok to loose some seeds while pushing the bleach solution out). all these is done in the sterile chamber.
NET RESULTS, no difference than the seed soaking method in terms of germination (in fact, better..perhaps it is due to the pressure cooker factor than have no contaminated flask so far) 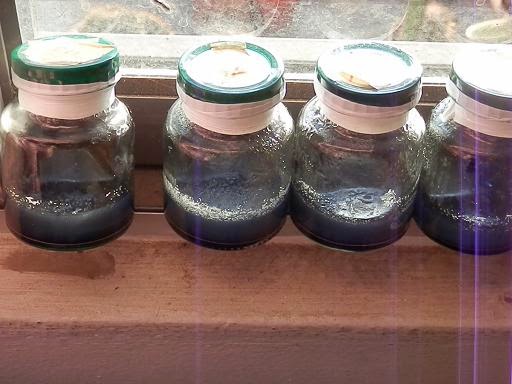 germination in progress, not the most appropriate pic to depict actual germination due to low uniformity of germination ie. some has already grow to size that are ready for replating while others just started to germinate (i forgotten to take a pic of another flask that had uniform germination and it is too late now because i had replated them) 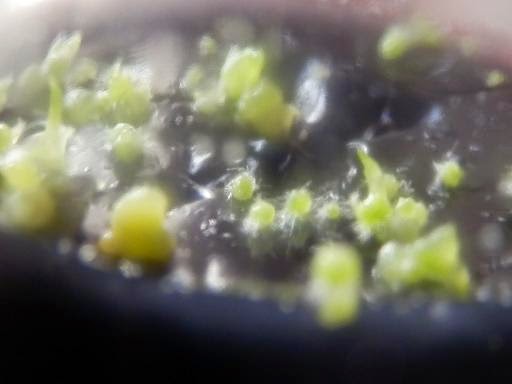 you will see some "pot holes" on the media surface because i had remove some of the protocorns for replating. if you do this under proper aseptic condition, the mother flask should not be contaminated and other smaller protocorns can still continue to grow and you can replate them later 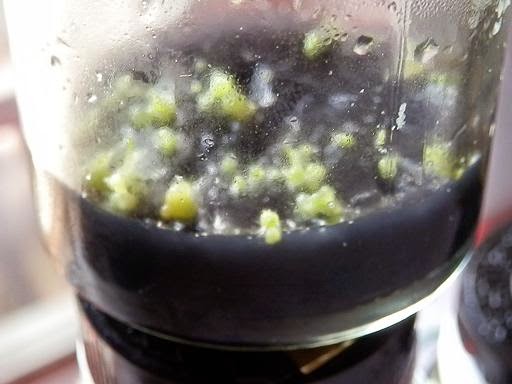 shoots are growing with two primary leaves, after sometime the roots will start to grow into the replating media. will try to update this post till their the stage of deflasking if everything goes on right. (hope i don't deflask them too early like previous attempt where is lost 99.8% of the seedlings) 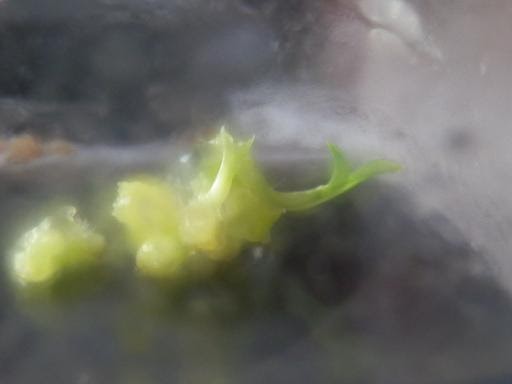 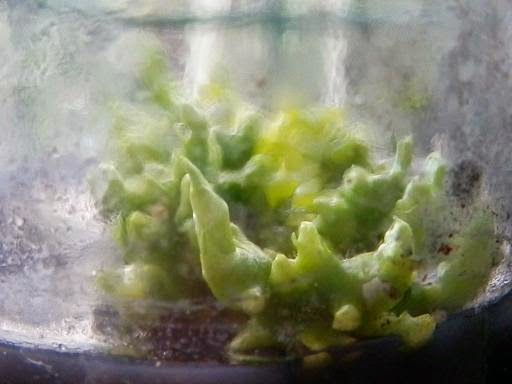 further development of the growth 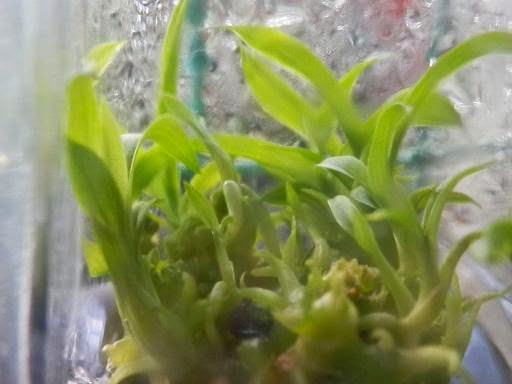 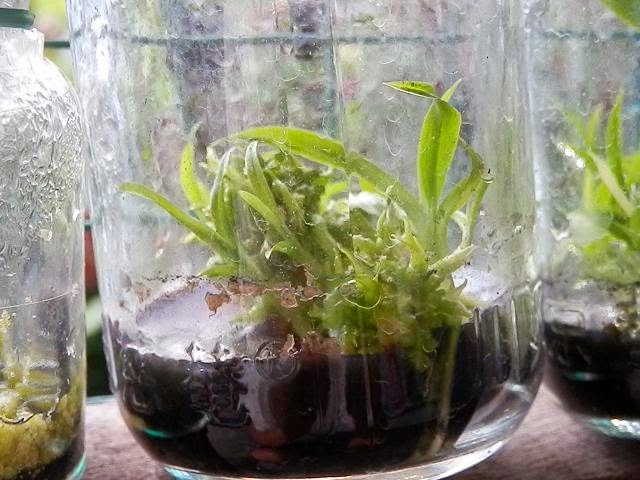 one of the seedlings that is growing much further ahead than the others but it is still a long way to go before deflasking. it is advisable to deflask once the PB is develop to increase survival rate after deflask 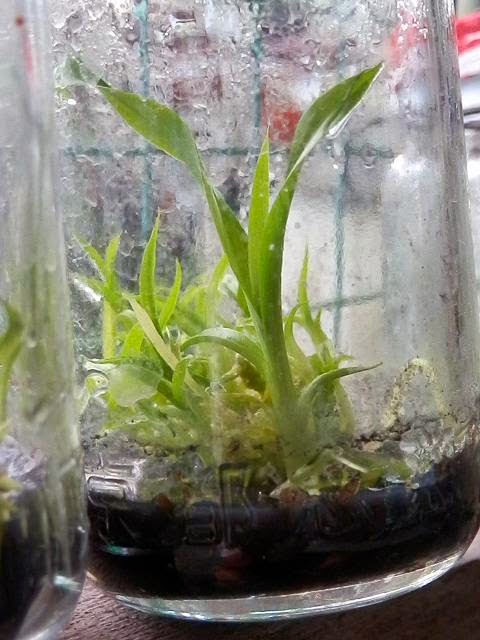 further updates to follow if everything goes on well ........keeping finger crossed 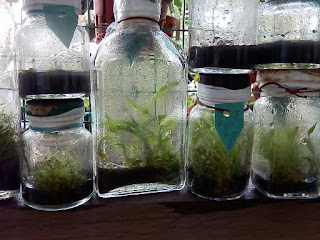 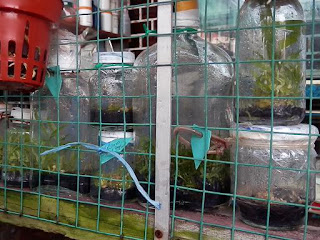 the two subsequent picture below is from earlier flask, you can see that the pseudobulb are forming, will not be long before they can be deflask. 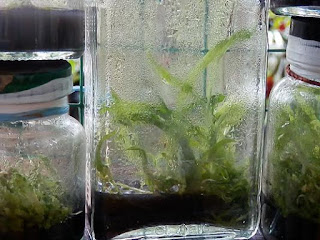 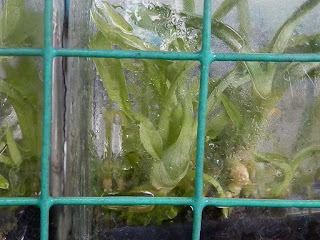 3/8/2015
some of the deflask seedlings, lack of uniformity, some PB is well developed and giving out new growth while the others are still quite small. got to figure a way out to settle this problem. had to deflasked them because the media is wearing. i put too little media in the flask at the first place 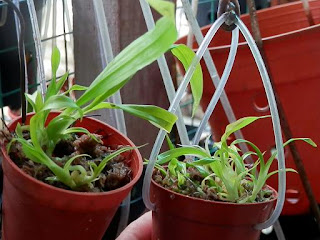 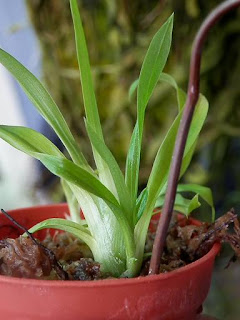 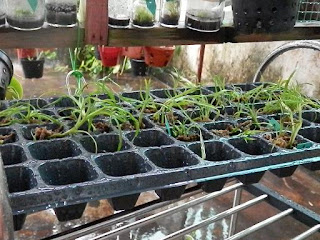 Posted by Catasetum_ian at 5:04 PM