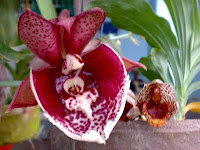 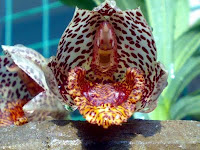 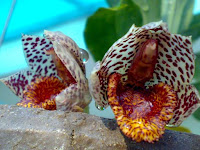 just got this plant several days ago with the flower buds, not a very healthy plant and it's quite "shaky" (i guess the roots haven't really sets in or poor rotting system). and out of the four flower buds, two had died off, two more started to open up slightly yesterday.

usually when i purchased a pot of catasetums planted in sphagnum moss, i would pull them out of the pot and transfer to charcoal media (with or without removing all the moss) and they do pretty well with this method.
i got this denticulatum soaked in mix charcoal and moss, after three days of hesitation, finally i decided to do the same, and YES i was right, just recently re-potted with poor rooting system. transfer it to charcoal media in the same time keeping my finger cross as so far all the comments i got from several catasetums denticulatums' owners are "it's a difficult one" or "i had killed one of those before". well frankly speaking all these are giving me cold feet. Though i would proudly say that my mortality rate of catasetum had been very low so far, but my confidence for this one so far is pretty "shaky" as the plant.
the first picture is to show the comparative size of the denticulatum flower to other ctsm counterpart like the ctsm chong keng yong in the first pic (flower about 3inches across)
Posted by Catasetum_ian at 7:13 AM