the first pic here is the bulb from the first part of this post where is held it on my palm, a new growth, actually its the second growth. the first growth died from bulb rot which i presume is a extended infection from the original bulb. this batch really had some nasty bugs with it, for not only this plant is affected in this manner, i had three others also suffered from the same fate) but fortunately the second rotten bulb give out a new growth from the base and i really hope no more bulb rot!! i don't think there is enough food storage in the primer bulb left, it is only barely 2inches and after the second growth, i can see signs of yellow of the backbulb. 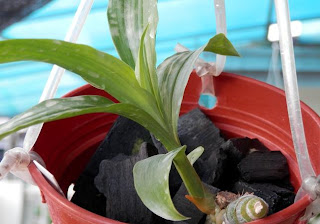 second pic, the bulbs are weak so they only manage to give rise to a small subsequent bulb, but at least they are in dormant phase (to me, this is considered 'touch down'), something like a safe point for them. since the infection is controlled, this division should be doing better in subsequent cycle. 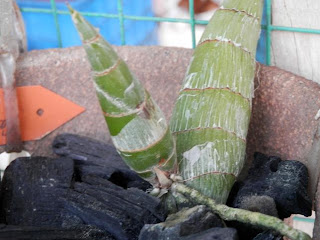 the pic below shows new growth, i got to remove the backbulb prematurely because it is rotting away when the new growth is very immature and seems like it made it. the new growth is starting to form the bulb on its own, hopefully will continue to do so. 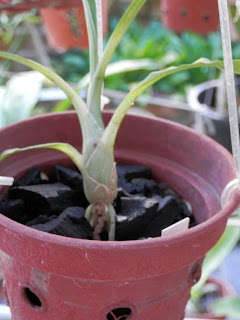 this is one of healthier plants among the batch that i got, from the first bulb, a smaller second bulb is almost mature and at the same time giving rise to a new growth. you can see here that the new growth is robust, eventually will be a larger bulb than its predecessor. all thanks to the second healthy bulb. 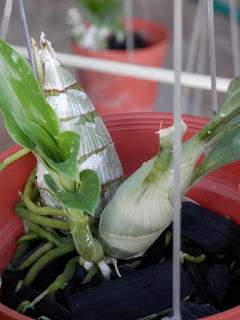 the two pics below basically is the best from this batch, slight fungal problem on the leaves as they grow but easily controlled with mancozeb. and the two small bulbs in the last pic even presented me with two spikes (one each) during the first growth. they are the catasetum cirrhaeoides (http://www.blogger.com/blogger.g?blogID=2935788560972723913#editor/target=post;postID=4078604512162977102) 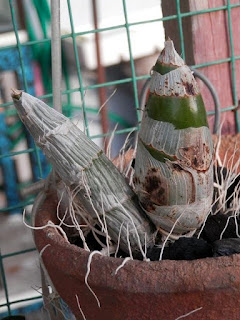 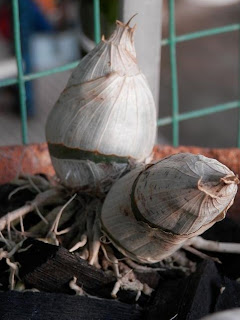 well, seems like the six made it, and basically this is one of the worst batch of catasetum i had ever obtained so far!! but on the other hand, they had also taught me a lot in this little misadventure and most important, all of them made it.
as a conclusion, sometimes we got to be bold to take drastic salvage procedure if the plant that we obtained is infected, this means cutting them down to individual single bulb if you had to. sometimes the 'wait and see' approach would caused one great casualty in the end.
Posted by Catasetum_ian at 5:49 AM