for those who had been asking (including myself when i first started off with this genera), i would like to take this opportunity to show those that are interested in catasetum pollination

below here the first pic is the pic of a female flower, focusing the the stigma cap (the white structure sitting on top of the stigma cavity). the other light green structure with a pointed tip is the beak anther.
to start pollination, remove off the stigma cap, it has a sticky part that resembles the viscidum of the male pollen, 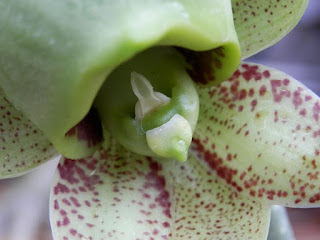 below the video clip shows the deposition of the pollina onto the stigma cavity. sorry that it is a little 'shaky' as i was doing it single handed while the other hand is holding the camera.

the second pic below is how i labelled my plants after the pollinaiton. ALWAYS labelled them after you are done. included in the tag is the crosses of the parents, the pollen parent and the date of pollination. once the tag is lost, it is merely impossible to identify the crossing when they flowered, this is especially true for complex hybrids that involves back cross. (a single pod can give rise to progeny with different colors, shapes and pattern of hybrids) 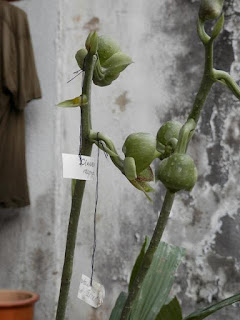 a catasetum pods may take up tp 8-9 months for maturity but for sowing purpose, i harvest them when they are 75% mature at least. sowing a green pod is easier as one can skipped off the seed sterilizing process.
HOWEVER i had heard and experience it myself that some pods had a much shorter maturity time, the recent one i had was three months four days. initially i could not believe it myself either till i opened up the cracked seed pod and there is tonnes of seeds in it. 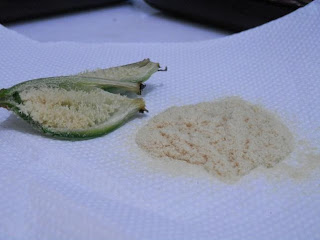 below is an update on the progress of the five seed pods with labels attach. if the pods manage to mature, may try sowing with commercial media this time. will update in this thread if i do. 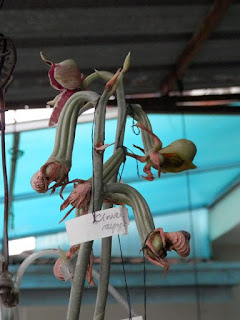 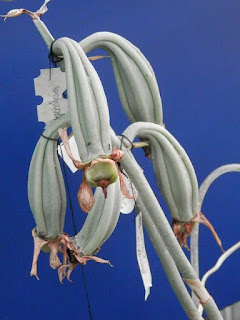 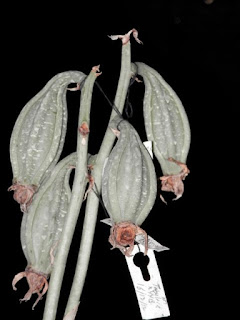 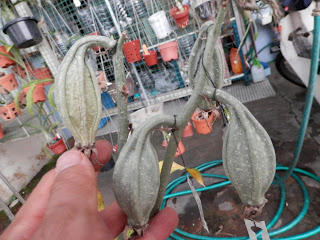 Posted by Catasetum_ian at 9:59 PM