this species is readily identified by its ciliated lip margin and the velvety of the inner labellum. the catasetum ciliatum. it has a pair of short stout trigger pollina, resembles a pair of fangs (same goes to its closely related species namely the roseoalbum, longifolium and gardneri under the pseudocatasetum group). the spike is erected in nature and epiphytic in nature as well.
it is recently that i learn that ciliatum is not a synonym for ctsm discolor. two closely resemblance species, from one internet citation there is 65% genetic similarity. however the ciliatum is identified by the presence of the purplish brown velvety stripes on the inner labellum with the more dark colored frimbriated lip margin near the tip of the labellum and in nature the ciliatum is epiphytic while the discolor is terrestial in nature.
ciliatum sepals and petal are curled, greenish white in color. the rim of the labellum is whithish with dark purplish browh tip. the appearance of the small flower is sometimes described as resemblance to a bee at flight. 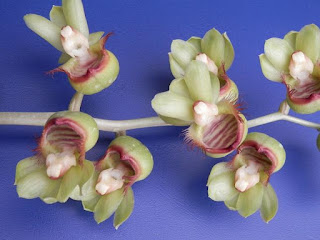 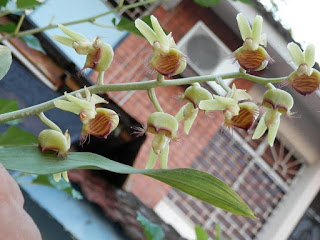 close up of the pic, the inner velvety of the labellum and the cilia on the periphery is visible here 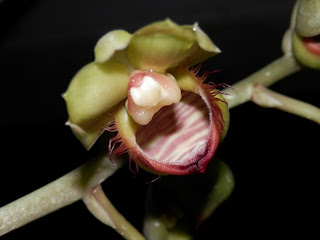 pic below showing closeup of the trigger pollina, as mentioned earlier, "fangs" 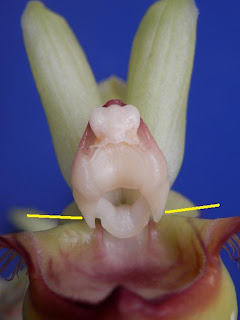 Posted by Catasetum_ian at 3:42 AM

Email ThisBlogThis!Share to TwitterShare to FacebookShare to Pinterest
Labels: ciliatum