At times, small sacrifices are necessary 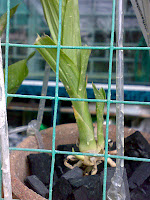 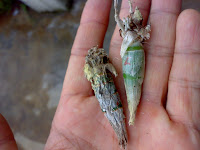 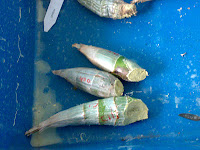 i purchase a few catasetums quite sometime ago, as usual they came in sphag moss media and also as usual, my practice is to remove them from the sphag media and repot them in my preferred media. however this practice this time paid off completely.
even after removal of the moss, then entire plant seems "ok" as there are new growths and some of the bulbs fat and solid, or at least they appears full of vigor. however upon closer inspection, i notice black spots on the bulbs and therefore i took the bold decision to cut them into individual bulbs!

the more i trimmed the bulbs apart, the more signs on bulb rot i found (you can see from the third pic how extensive the damages were). some only came in 2 bulbs and the size of the bulb are merely 2 inches (in the pic where i am holding them on my palm but sad to say one is already rotting away when they arrived).

2 months after separating them, at least one from each type of the catasetums had started new growth except for one, and i only came down with 2 bulb that is totally lost, started to have duplicates of them due to the division. with some drastic measure, some are cut what ever is left is the undeveloped lead bulbs and happy to say, new roots started to emerge a few days ago (first pic).

if i were to left them in the moss or without doing further inspection , most likely i would end up losing half of them. thus i would say it is a small price to pay for in assuring their survival. sometimes small sacrifices are necessary when one are fighting a war, as the Witwicky said it "no sacrifice no victory".

but for the mean time, let us not forget that this does not means the end of this "war", but only the beginning as there are still many challenges ahead.
Posted by Catasetum_ian at 5:17 PM