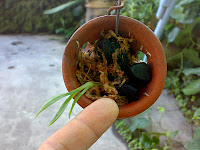 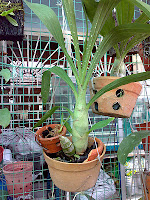 Roots as we know basically one of their main function is for water and nutrient uptake, anchoring of the plants. but for some other plants, roots may have additional function.

not known to most growers of catasetums (including me), catasetums roots also aid in

1. root keiki ( first pic showing the keiki after accidental removal and the second pic is for the comparison size of the keiki and the mother plant)
not known to many, catasetum roots can produce keiki on rare occasions. me myself had the very rare opportunity of experience this. it all started with a pot of my catasetum longiflorum. one day after coming back from work, i was heartbroken to find that the entire pot just fell onto the floor and the pots were shattered to pieces, roots were broken but the main chunk of the roots were there but i can see many tiny broken roots.
but 2-3 months later, i notice "a weed" growing beside it, did not pay much attention but somehow it looks different coz the leaves of the so called weed were thicker than usual. until one fine day i decided to pull the weed out coz it is "STEALING THE NUTRIENTS" away and just to fine there is a swelling structure at the base. i was thinking mmmmmmmmm....this one is no ordinary weeds, so i let it to sit in a small pot with some moss.
a week later i notice new roots growing with velamen structure and i said to myself "OMG!!! what have i done". knowing that it was an orchid plant and suspected a longiflorum (catasetum longiflorum had a distinct shape pattern of the leave, straight long upward leaves that are narrow, very different from other catasetums.
one particular vendor provided me with some info on this and i dig the net for a reference and "voila"!!, in the book World of Catasetums, there is a part mention in the root section that "occasionally, the main root of the catasetums may produce keiki"!!!

2.aid in photosynthesis and aeration
photosynthesis of the plants. and for catasetums collectors, some of them tends to produce tiny upright vertical roots called the pneumatophore. some grower said that production of these pneumatophores are attributed to poor aeration of the potting system, but some do not agree. from my personal point of view, those catasetums that i potted in pots that are without side holes tends to produce a lot of pneumatophores. those that with it, none to a few only. but these are general observation, i think i would need a bigger sample size observation before i could draw to any final conclusion. as far as i am concern, as long as those roots are silvery white with long green tips, i am happy with it.

3.prevention of water loss and also aid in water retention
mature orchid roots are spongy in nature and this is attributed to the presence of velamen, the outer white spongy material that covers the root of the orchids. these velamen are composed of multi layer dead epithelial cells with thick cellular wall. during watering, velamen allow passive diffusion of water in between these cells while during the dry season, it prevents rapid water loss of water from the roots by reducing transpiration loss by acting as a barrier
due to the spongy nature of the velamen, they also aid in protection of the orchid roots from physical damage.

Posted by Catasetum_ian at 4:32 PM