this plant belongs to one of those few early hybrid on mine in the collection. from the characteristic of the spike and shape of flower, basically it had a strong genetic influence of the ctsm naso. the spike is upward, and the downward facing labellum with the nose like projection at the tip of the labellum.
the first spike is with 6 female flowers due to the hot weather a month plus ago. as the second spike was developing, i can see the fat flower stalk starts to form, indicating a female flower again. i then transfer the plant to a dimmer area, and luckily i got a male flower at the end of the spike. so three female flower and a male, but the male bloomed a week later after the female, mostly due to the energy of the plant is directed towards the formation of three seed pod that i had pollinated a week ago.
on this second spike there is three female flowers forming and i took the liberty to pollinate them with three different catasetums.
my first experiment with DIY media flasking still haven't show any signs of germination till now, so i think for these three pods, i think i gonna order some commercial media to try it out. anyone who is interested to try out commercial media for flasking, this is one link which i came across.
http://www.orchidseed.com/media/media.html
anyone who had success or tried different types of media whether it is commercial or DIY, please drop me a link, i would like to learn more about it. 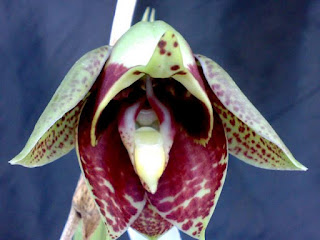 second pic showing the swelling of the three ovaries after pollination, the male flower bloomed 5 days later after the female, mostly due to the energy is directed temporarily to the formation of the seed pod initially 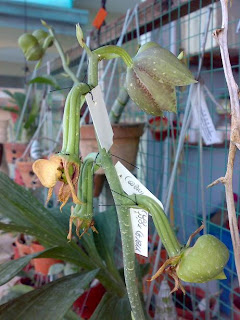 lateral image of the flower, here you can see the nose like projection from the labellum, showing strong influence of the naso blood line 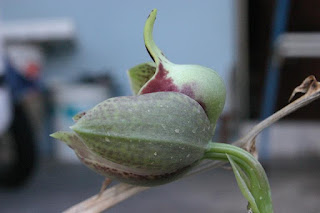 spike that is erected upwards, characteristic again of the naso 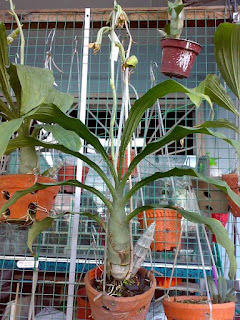 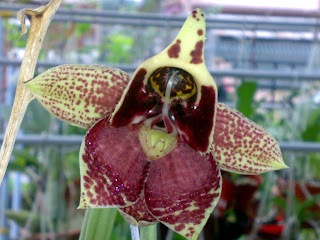 Posted by Catasetum_ian at 4:41 AM