hi fellow catasetums fans, i had posted spike of this plant before but just thought to share some stories behind this plant. when i got this plant, it is at the end of the bloom but somehow all the bulbs just rotted together in less than a week. i manage to salvage on bulb, and from there i build up this plant. 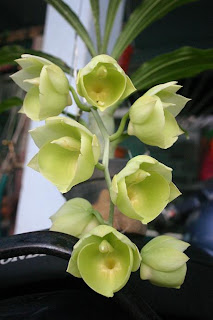 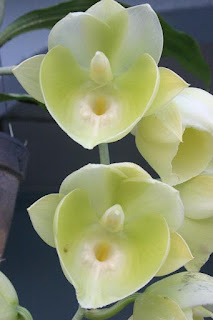 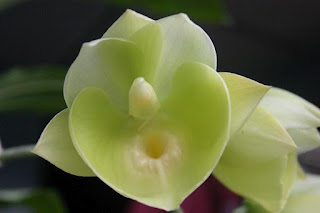 now it has three bulbs, and for this round, it produces 8 blooms in a spike. UNFORTUNATELY, before the full bloom sets in, some insect had already ejected one of the pollina. and to make thing worst, while i was taking some photograph of this plant, it fell from the platform and another two pollen was ejected. it sustain minor bruises on the flowers but plant unharmed. such unfortunate event for this catasetum!
Posted by Catasetum_ian at 5:26 AM