while i was spending my routine evening times in my orchid garden, something caught my attention. it looks like an orchid keiki and gently i lifted the plant out as it was adhering to one piece of coconut hush chips. upon inspection, no doubt it is an orchid protocorn with roots coming out and three growths as well.
orchid germination can happens in two ways, namely the symbiotic germination or the natural way secondly the asymbiotic germination or in vitro, that is by flasking. in symbiotic germination, the orchid seed need to be infected by a mycorrhizal fungus for germination to occur and this fungal will feed the orchid protocorns until they are mature enough. protocorn will slowly turn green and with the aid of the chlorophyll photosynthesis is able to take place.
in asymbiotic germination, mycorrhizal fungal does not play a role and sugar are added into the media to feed the germinating seed initially as they produce their own food during the initial phase.
as far as i can remember, i had only scattered two seeds, one is a phalenopsis pulcherrima and another one is my very first catasetum hybrid in which i experimented with my DIY flasking.
gently i removed the remaining coconut husk from the root attachment and then transferred it to a clay pot with loosely packed sphagnum moss. from the gross appearance of the leaves, it does looks like a CATASETUM to me! 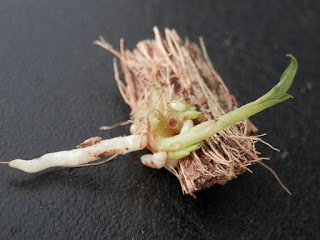 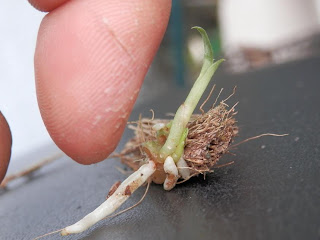 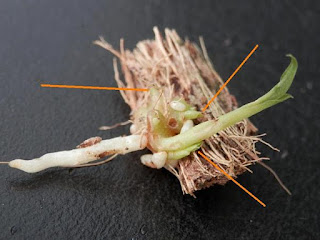 in the last pic i included three arrow showing the three new growths emerging from the protocorns.

24/5/2012 - sad to say that the orchid protocorm did not make it, severe fungal/bacteria infection causes a fast rotting of the protocorn that eventually kills the keiki in about 2 days time. what a short lived joy, though disappointment is at its peak but in the same time also give me stronger encouragement to try to germinate more orchids in the future, especially with flasking.
Posted by Catasetum_ian at 7:08 AM